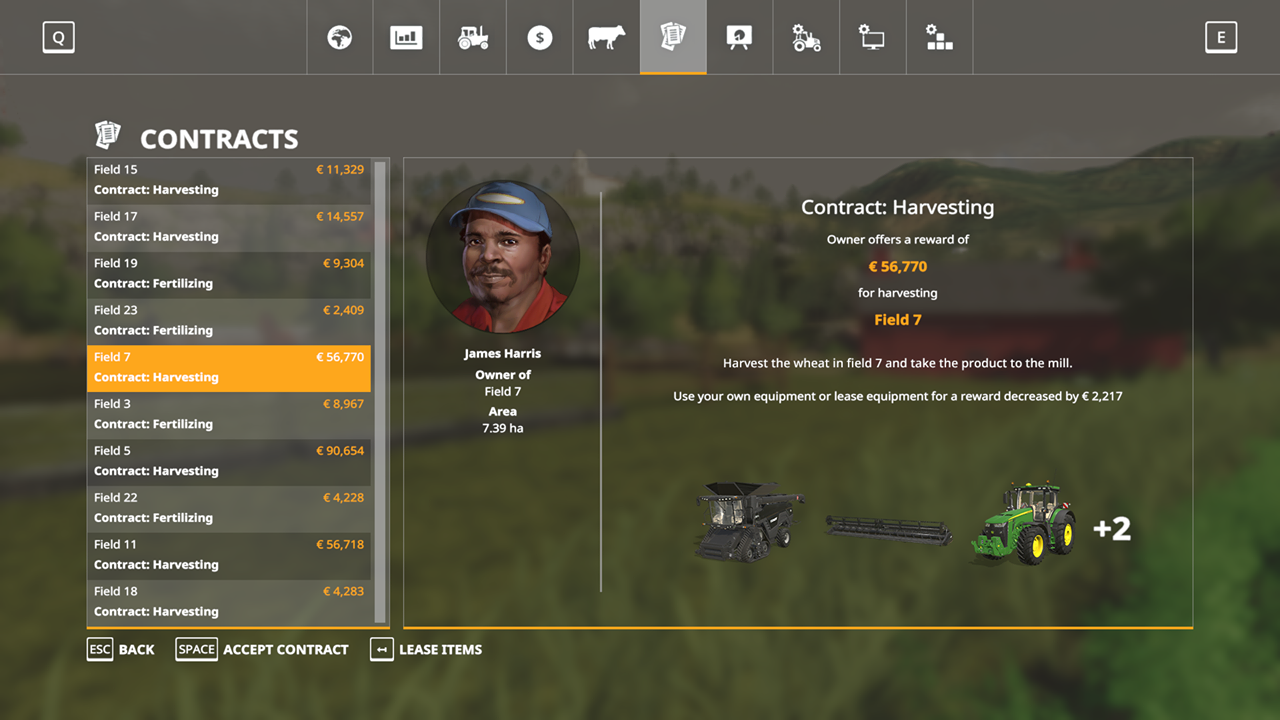 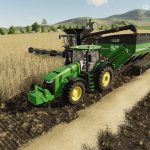 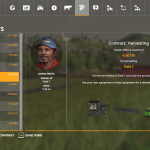 Welcome to our second devblog for Farming Simulator 19, due later this year. In this devblog we’ll be talking about the tweaks we’ve made to the missions system to help get you playing the way you want, faster.

First of all you no longer need to travel across the map to interact with mission givers. A new contracts menu lists every mission that’s currently available, detailing how much money you will get for completing it, as well as what you’ll be expected to do. This means less time spent going between missions, and more doing what you want to do – farming! There are also no longer time limits on missions and you can save while a mission is in progress, so you can work at your own pace.

We’ve also given you the option to complete missions without leasing the equipment. This has two benefits – first, you’ll get more money from the mission, as you won’t have to pay the lease. Second, it allows you to use your own equipment for missions, meaning as you build up a speciality and a garage you can take on more missions and make more money to expand your farm. Leasing is still available for the early game and those that might want to try out new vehicles before buying them.

We’ve also added a new mission type, hay and silage baling. This will involve every step of the process, from cutting the grass to turning it into bales and finally delivering it. Weeding missions are now their own category, rather than purely a part of the fertilization process, including using the new sprayer tool on more developed weeds.

Transport missions are also returning from Farming Simulator 15, asking you to deliver goods from one place to another throughout the map. Take a serene drive through the new landscapes of our upgraded game engine and make some money while you’re at it.

Finally, missions are being added to multiplayer, letting you complete them cooperatively. This gives you more things to do with other players than ever before, and ties into our larger improvements for multiplayer in Farming Simulator 19.

We hope you enjoy missions in Farming Simulator 19, either alone or with friends, when it releases later this year.

Finding a game interesting after investing 300 hours into it can become a bit challenging. But with mods as long as there is a new update is assured, you are guaranteed a few more hours of new exciting gameplay. Farming Simulator 19 Mods Mods are one of the greatest upgrades and can make your game unique. Downloading and adding FS19 NEW MISSION SYSTEM Mod to your game is not difficult at all - you simply need to save a file and run it. Each Farming Simulator Mod will provide you with particular options so go ahead and add it to your version. Few clicks and you will be able to use all extra features that were only imaginary before. It is the easiest way to get the best of the game, your opponents will be surprised! Then all you need to do is simply click on FS19 NEW MISSION SYSTEM Mod free download button and implement it to your game. This few simple steps will lift your game to the upper level – what can be better that upgrading your game personally? Break all boundaries and develop your farm easily. All of this is just the tip of the iceberg, what we offer on our website is countless hours of fun gameplay that will keep you invested for months. So go to our website, select your mod of choice, and click on download.