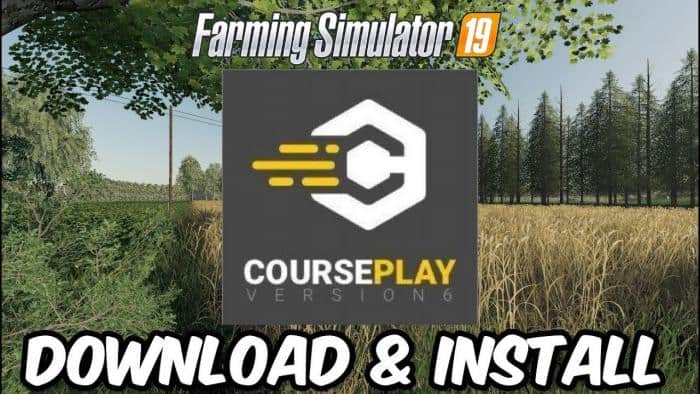 This is probably the most popular mod in the game. The Kursplay script makes it possible in the game to create routes and tasks for various types of equipment, and then complete them. This means that by creating a route for your tractor, or, for example, a truck, it will independently perform the specified work without your further participation. As you can imagine, this is much more interesting and, even more so, more functional than standard hired workers in FS 2019.

After downloading and installing the Courseplay modification into the Farmer Simulator 19 game, you will be able to create routes for various agricultural equipment. As an example, if you need to send a tractor for some kind of work: for plowing the land, sowing the future crop or harvesting it, then you just need to indicate the field number. A truck can be taught to deliver some of your goods for sale or to transport goods from point B to point A. It all depends on your imagination, because the script has many possibilities.

How to use the Kursplay mod in FS 19?
Nothing complicated really! After you have downloaded and installed this mod, you need to press the following key combination: Ctrl plus Delete. A menu in Russian should appear before your eyes. Everything in it is quite simple and clear. But, in short, it all comes down to creating a route for the unit of equipment you need and its further reproduction, that is, you indicate where to go, which route, and what to do in the end.

True, there is one BUT: the first time, to create a route, you will have to drive it yourself. Thus, you specify the points to follow, turns, etc. Well, then the technique will already remember the route and your actions and will be able to move independently.

Features of the version:
– You can select the number of flights from the base to the point of sale;
– After the specified number of flights, he gets up at the end point and reports it;
– Also, while the tractor is waiting for the filling of the combine bunker, it turns off the engine;
– Minor bugs fixed;
– Proven to be stable

Finding a game interesting after investing 300 hours into it can become a bit challenging. But with mods as long as there is a new update is assured, you are guaranteed a few more hours of new exciting gameplay. FS 19 Other Mods are one of the greatest upgrades and can make your game unique. Downloading and adding FS19 COURSEPLAY V6.02.00079 Mod to your game is not difficult at all - you simply need to save a file and run it. Each Farming Simulator Mod will provide you with particular options so go ahead and add it to your version. Few clicks and you will be able to use all extra features that were only imaginary before. It is the easiest way to get the best of the game, your opponents will be surprised! Then all you need to do is simply click on FS19 COURSEPLAY V6.02.00079 Mod free download button and implement it to your game. This few simple steps will lift your game to the upper level – what can be better that upgrading your game personally? Break all boundaries and develop your farm easily. All of this is just the tip of the iceberg, what we offer on our website is countless hours of fun gameplay that will keep you invested for months. So go to our website, select your mod of choice, and click on download.