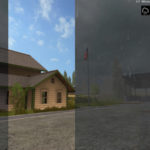 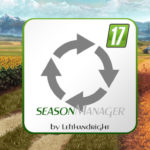 Preface:
It’s mainly already a long-known matter that the climate within the LS is at all times very random and there aren’t any seasons, which is particularly the sensible participant is a thorn within the eye. With the seasonManager, I attempt to clear up this drawback to the very best of conscience with a couple of useful interventions by way of scriptmod.
To say it with the phrases of upsidedown: “Mods, which one ought to not likely need in any respect”.
I recommend everyone who wants to publish a video about the seasonManager on YouTube to read the description carefully. Otherwise someone else makes a video without any content because the mod was installed incorrectly. In generel I recommend also the normal user to read the following. This avoids you the trouble and me the extra work.

Function:
Every day the seasonManager is assigned a season. When saving, it writes its personal values for the approaching climate within the careerSavegame.xml, to present something like seasons. The result’s that it rains in autumn for a very long time, within the winter hail / snow and it’s cloudy within the spring.
The effect is that in autumn and in winter a harvest is impossible. As a result of precisely is the objective of seasonManager. In winter the combine is within the barn, the time can be used completely to look after the animals. Otherwise you simply let the time go, anyway.
The entered values manage the climate for 12 months, so 4 days ingame or more. After this, it’s important to save and reload the game as soon as, in order that the values are renewed. This must be acceptable, nonetheless, for the reason that values of the engine itself run out additionally at a while.

Installation:
Drag the seasonManager.zip to the mods folder, accomplished. Then load your savestate and save it instantly, in order to enter the new values. After a restart the values will be accepted.

Deinstallation:
For those who would somewhat have the engine climate, delete the seasonManager.zip from the mods folder. After 4 game days, the climate shall be pretty much as good or bad as before than.

Configuration:
Configurations aren’t necessary. But if you want some adjustments you can change some values in the seasonManager.xml which can be found in the savegame folder after the first save. It’s mainly self-explaning.
version: Don’t change it, it’s just helping the scipt.
seasonDuration: Here you can change the duration of a season in days soon. It’s not available at this moment because the weather function has to be rewritten.
language: This changes the language of the display. Enter “de” for german. Enter anything else for english.
displayX: Changes the x-position of the dispaly. Float values between 0 and 1 are allowed.