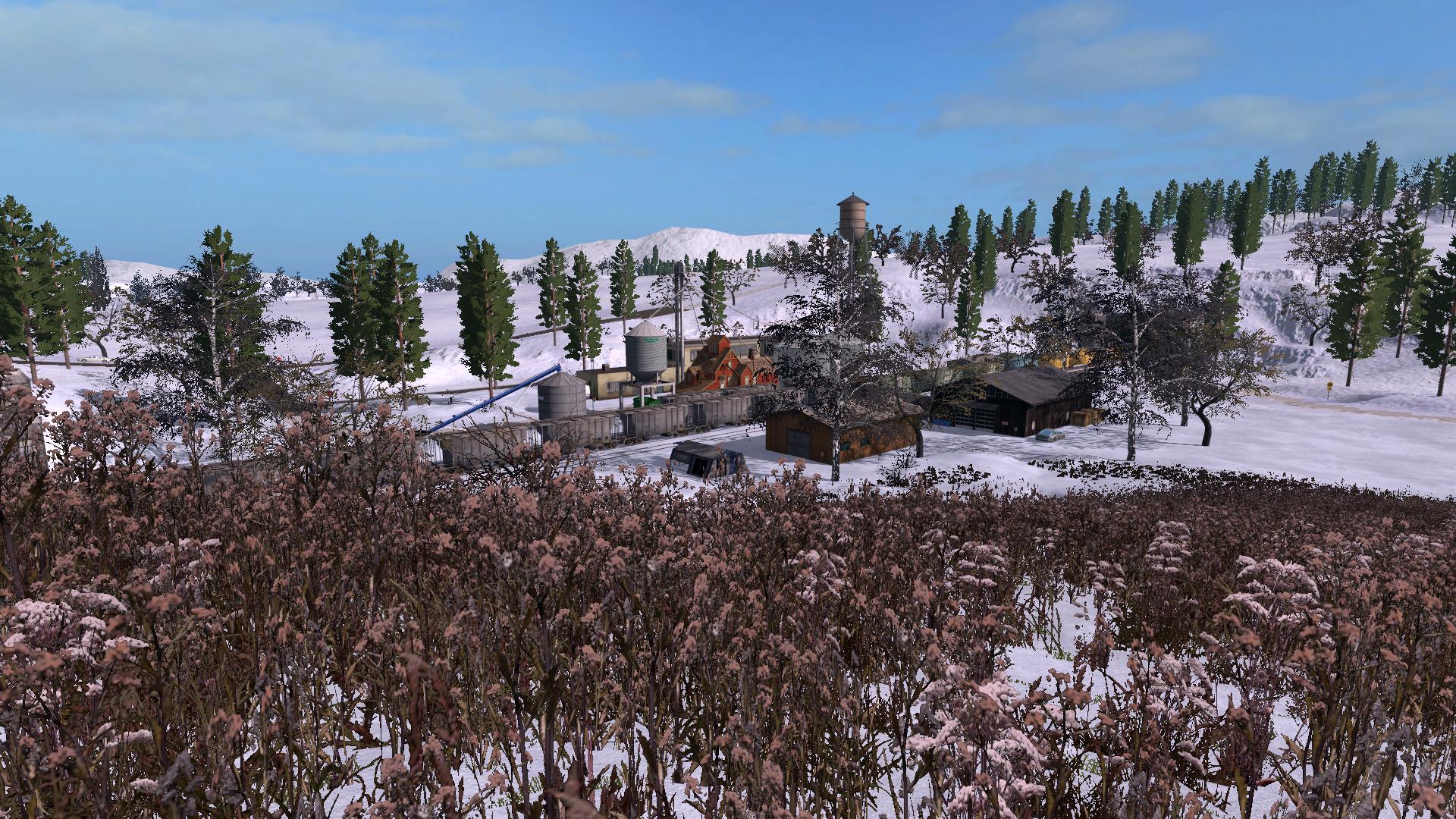 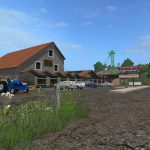 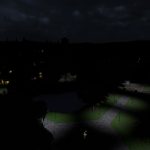 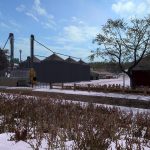 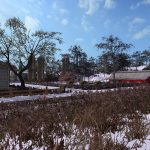 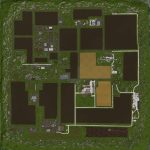 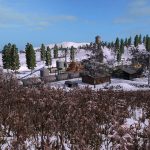 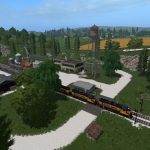 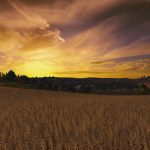 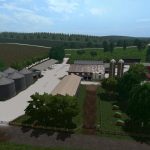 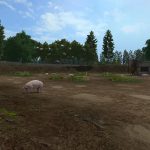 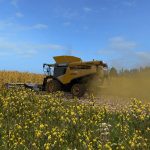 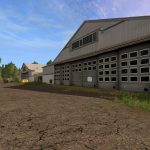 Now, in this updated version 1.2, even more features have been added:
Midtown USA 2017 now incorporates the all new “dynamic mud” (based on the
original mud mod and modified by permission from the original author by
reallogger) Without the Seasons Mod active, the mud will be “on” or “off”
according to whether or not it is raining… With Seasons Mod active, the
mud “comes alive” gradually getting muddier according to ground wetness…
a few dry days in a row will “dry out” the muddier areas…

Also, the all new “grazing mod” by reallogger… this mod “scans” the grass
in the pasture area to fill the grass troughs automatically… With Seasons,
this mod really comes alive, as there is no grass in winter and in early
spring, so you need to supplement the animals grass with hay bales… Also
care is needed when placing a large number of animals into the pasture, as the
grass available in the pasture may not support them if too many animals are in
the pasture, just as in real life. Mowing of the pasture grass is disabled to
better allow the grazing mod to function as it should…

This map now also incorporates the clip distance FPS mod by Ian898 of Frontier
Design… clip triggers are placed in the machine storage buildings around the
map to help reduce fps issues from having all your favorite, high detail mods
parked in them…

Additionally, the water trough mod is now added to all animal water troughs…
so no more worrying about carting a water trailer all over the map to keep the
animals happy…

And finally, the bale storage mod is incorporated into the old warehouses in
the downtown area… store your bales safely away, without the fps issues that
are associated with having large stacks of bales lying about. Check the status
of your stored bales on the display boards out front of the warehouses. Also,
a bale sell point is now provided at the warehouse sell point…

So now, Welcome to MidTown USA…

a small town surrounded by lush, fertile farmland located in the heartland of
the United States. Based on the field layout of the stock 2015 map, the scenery
and layout depicts a typical midwestern slice of American farming… with
realistic sellpoints, farm silo storage and even limestone gravel roads, and
a long, fast moving train.

Large equipment will be needed to fully benefit from the spacious fields… the
farm is large, with plenty of storage and everything close at hand. The large BGA
depends on you to keep it going… and the village depends on it for their power
needs! You have full use of a compost plant, but must supply your own fuel and
run the unit… The Garden Center pays a premium price for as much compost as
you can bring to them! There is plenty to do in here, so enjoy farming in
Midtown USA!

This map has all the default crops, including a field of spruces for forestry,
and 2 fields set up with grass which can be fertilized for greater yields.

There is a modern grain system (with an accurate, real world capacity) on the farm
to store your produce until a better price comes along.

– fermenting silos at the farm do not need compacting / will empty directly into
feed mixer / check status at console next to silo. (2 silos, accepts chaff,
grass and dry grass)

– BGA allows tipping with trailers directly into hopper, but you will need to
supply your own ramp (any decent placeable will work) / recommend BGA extension
mod for more lifelike BGA experience. If using the BGA Extension, it will also
accept other fruits such as sugarBeet and potatoes. If no ramp, can dump on the
ground at the BGA and shovel into hoppers. If the Platinum DLC is installed, can
use a sugarcane trailer to tip directly into the hopper. Additionally, there is
a selection of equipment at the BGA which you do not own, but you can use…

– Compost plant is available for free use, accepts most anything, including bales
Compost must be shoveled up from heap into trailer for transport to Garden Center
sell point… compost can also be spread on fields as fertilizer, same as manure.
Composter must be fueled first in order to run.

– water tank at main farm has a water fill trigger for free water.

– Milk sale is stopped on this map… there is a fill trigger at the livestock
farm milk tank, use an appropriate milk tanker or truck to carry your milk to
the local dairy…

– There is custom traffic on this map, edited for faster speed without tinkering
with the game itself and messing up other maps… definitely do not pull out in
front of them! Also, several vehicles are parked at various locations (during
the work day) and leave at night.

– Chopped straw is built into this map, NO NEED to have the choppedstraw zip in
the mod folder as well… in fact, if you do, this could cause conflicts…

– Mud mod is incorporated into this map as well… in this version, it has been
upgraded to the all new dynamic mud…

– The map is fully Seasons mod ready, with a custom snowmask and all foliage
layers and trees change with the seasons. Additionally, there is a custom GEO
built in to this map… NO OTHER GEO MODS should be in the mod folder with
this map as this WILL cause conflicts…

– For those with the Kuhn DLC pack, a bonus baler will be available in the
starting equipment, for those who have the Big Bud DLC, a seeder… lastly,
when the Kotte Universal Pack V 1.0.0.6 is in the folder, you will have a tanker
truck in the starting equipment for hauling your milk or fuel…

NOTE: A useful mod pack which will allow the hauling of milk from the farm to
the dairy, also carrying fuel from a gas station to the composter is the
FS17_kotteUniversalPack.zip (V 1.0.0.6) this is available on marhu.net, as well as
several other places…

Disclaimer: this is a highly detailed map, using many different scenery objects
and several custom foliage layers to achieve visual realism, and as such will
require a strong, high spec PC to run… especially if you have many mods on the
farm. The only solution to this issue is to not use any mods and/or turn the
settings down. Additionally, to avoid unforeseen issues and conflicts, please have
ONLY this map in the mod folder as having multiple maps in the folder will cause
issues as the game loads all the scripts from all the maps, including the active
one…

This will be the only version of the map, unless someone finds a game breaking
bug, shouldn’t since it’s been fully tested. However, any things you don’t like or
would like to be improved will have to be for your own private editions.

Notice: Since this map will end up being uploaded everywhere, no matter my wishes,
please at least include the ENTIRE description and CREDITS when you do… by doing
this, you show respect for all the hard work of the great many modders whose work
goes into maps such as this one.

Finding a game interesting after investing 300 hours into it can become a bit challenging. But with mods as long as there is a new update is assured, you are guaranteed a few more hours of new exciting gameplay. FS 17 Maps Mods are one of the greatest upgrades and can make your game unique. Downloading and adding FS17 Midtown USA 2017 Seasons Ready Plus v1.2.0.0 Mod to your game is not difficult at all - you simply need to save a file and run it. Each Farming Simulator Mod will provide you with particular options so go ahead and add it to your version. Few clicks and you will be able to use all extra features that were only imaginary before. It is the easiest way to get the best of the game, your opponents will be surprised! Then all you need to do is simply click on FS17 Midtown USA 2017 Seasons Ready Plus v1.2.0.0 Mod free download button and implement it to your game. This few simple steps will lift your game to the upper level – what can be better that upgrading your game personally? Break all boundaries and develop your farm easily. All of this is just the tip of the iceberg, what we offer on our website is countless hours of fun gameplay that will keep you invested for months. So go to our website, select your mod of choice, and click on download.