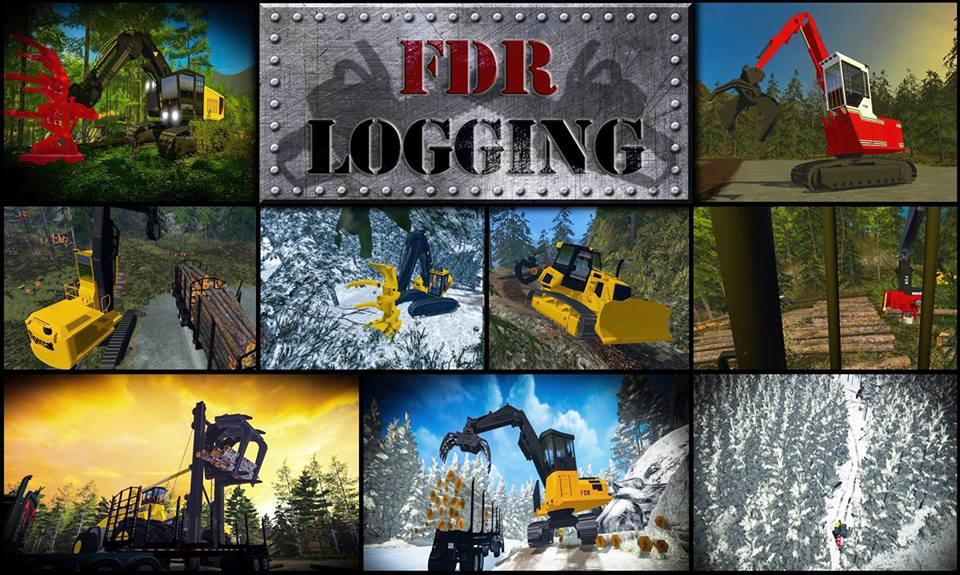 I’m releasing the Machine Pack 9, which basically just addresses a few issues that patreons found in beta testing plus adds the new swing loader for you guys to play with. FS2017 is officially only a week away so I will not be doing any more modding for 2015.

Updated 9 Pack Notes
– New Swing Forwarder
– Swing forwarder has had grapple replaced with a fixed head style as the dangle was having problems on hills and weird angles
– Clamshell Loader + Dozer have had the dangling angles fixed so that the grapples cannot get “stuck sideways” in the air anymore, also they are much easier to handle in terms of swing.
– Buncher heads are now alot more “solid” feeling meaning they don’t have the lag like dragging feeling when moving them side to side, this allowing for much smoother cutting of trees.
-Bunchers now have thinner heads width wise making it easier to line up your cut node as well as looks more uniform to the machine.
– Retextured the trees on both maps so that the silly branches arnt sticking out so far. the previous trees had huge branches that would easily stick through the cab when cutting, they have been shortened and changed to work better for handling as well.
-Fixed issue where some trees were missing the branches
– All machines Grapples stay more solid to the arm (less drag and lag off centering)
– All machines Grapples are more solid and pickup logs with less jitter
– Various fixes to a few collisions and problematic stuff
– Log trailer now has swinging arm lock that fold into the stake instead of sticking off the side of the truck.

FS 15 Packs Mods are one of the greatest upgrades and can make your game unique. Downloading and adding FS15 mods | FS17 mods | FS19 mods to your game is not difficult at all - you simply need to save a file and run it. Each Farming Simulator Mod will provide you with particular options so go ahead and add it to your version. Few clicks and you will be able to use all extra features that were only imaginary before. It is the easiest way to get the best of the game, your opponents will be surprised!