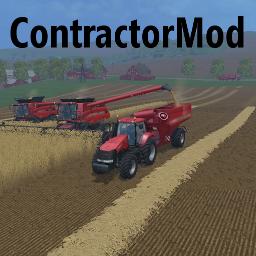 This mod Contractor Mod FS15 enable simulating a defined number of characters you control one by one during a solo game.
Attached video shows a gameplay scenario using ContractorMod (recorded on a beta version on FS2013)

By default, 4 characters are available Alex, Bob, Chris et David.
At first loading of a map, they are located at the Career starting point.
When saving the game, characters location and vehicle are saved so they will be restored when loading the game.

Default key to switch between characters are:
– NEXT : Tab
– PREVIOUS: Shift + Tab
They can be changed but by default replace the standard switch between vehicle since it’s disable.

This mod is compatible with PassengerMod specialization and with CoursePlay and FollowMe mods.
So, for example, when using FollowMe, one character will be the Leader and another one the Follower.