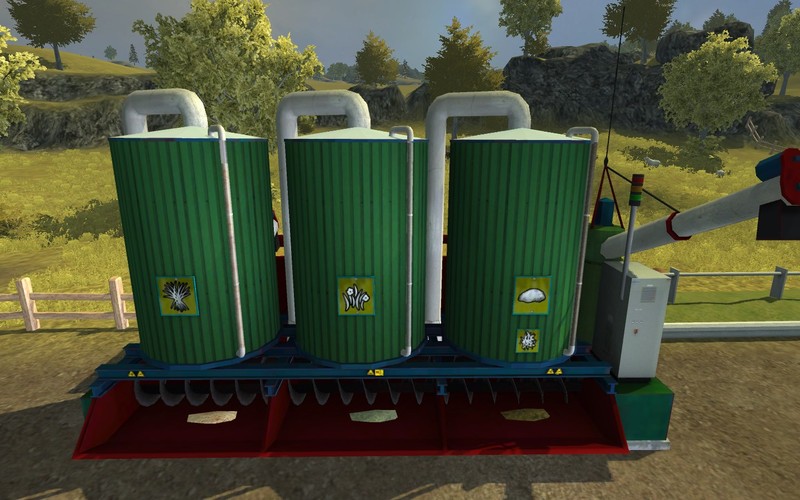 of Marhu
With the mixing station can be just as prepared as a feed mixer, feed for the cows.
But in larger quantities because they can be filled with full trailer loads.
The three storage silos shall be filled with silage, hay u. Straw (depending 50t) then per hour produces 10t compound feed to the mixing tank is full, this summarizes 100t compound feed, which can be picked up with a trailer and fed to the cows.
The silos have 3 analog level indicators, in addition the exact levels will be displayed in the control cabinet in the help text.

The signal lamp shows:
Flashing red = a silo is empty
Flashing amber = mixing tank full
Green = all right (it is produced)
So you do not have to constantly go to the control, there is a message system in the manner of a “live ticker”
displaying messages on the top of the screen.

To remove of compound feed a matching trailer is needed, which can load forage.

Since Marhu has unfortunately given up, but released his mods
there is his mixing station here. Thanks for all the great mods Marhu.

How to install mods
In Farming Simulator 15 it’s easy to install mods. You just need to download mod from www.farming2015mods.com. Upload to your game folder. After that you need to activate the mods you want to use.

Finding a game interesting after investing 300 hours into it can become a bit challenging. But with mods as long as there is a new update is assured, you are guaranteed a few more hours of new exciting gameplay. FS 15 Objects Mods are one of the greatest upgrades and can make your game unique. Downloading and adding Mixing Station V 3.0.0 mod Mod to your game is not difficult at all - you simply need to save a file and run it. Each Farming Simulator Mod will provide you with particular options so go ahead and add it to your version. Few clicks and you will be able to use all extra features that were only imaginary before. It is the easiest way to get the best of the game, your opponents will be surprised! Then all you need to do is simply click on Mixing Station V 3.0.0 mod Mod free download button and implement it to your game. This few simple steps will lift your game to the upper level – what can be better that upgrading your game personally? Break all boundaries and develop your farm easily. All of this is just the tip of the iceberg, what we offer on our website is countless hours of fun gameplay that will keep you invested for months. So go to our website, select your mod of choice, and click on download.