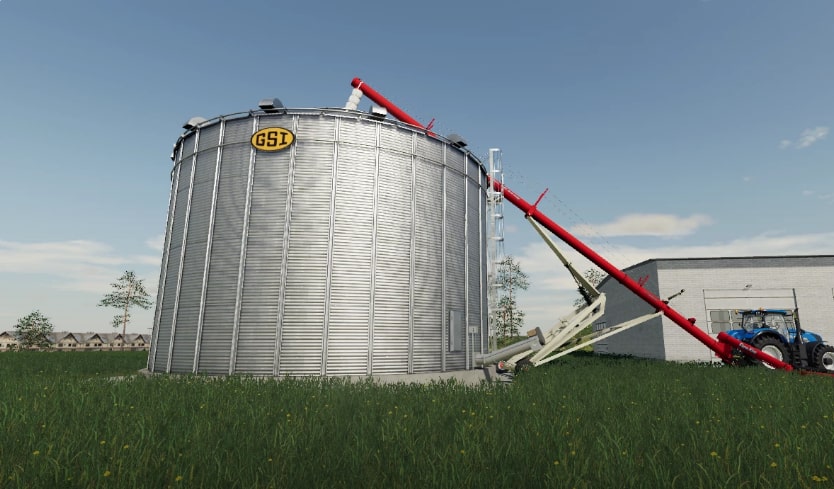 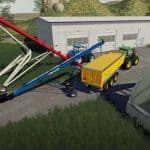 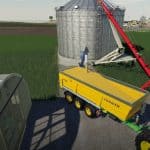 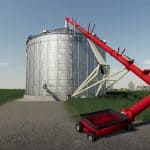 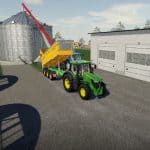 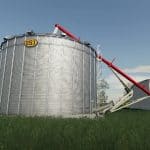 This is a GSI custom farm silo bin (original models by SouthSaskModding and killerrf / custom script by GtX) originally a generic all crops in one bin but with a realistic top trigger, now redone for FS 2019 as a realistic single bin, able to hold multiple crops, but only one at a time, due to the custom script. It is available as a placeable for those who would like a realistic American style farm silo bin for their farms that acts and looks like a real bin.

The capacity is set to a realistic figure, calculated from the volume of the bin used in the system. The capacity per type is 1385442 Liters and the purchase price is a more realistic $79,000.00…

This bin has the trigger at the top, as a realistic one would, fill it with an auger such as the Farm King or the Batco… unload from the built-in unload pipe, using the Brandt auger.

This silo system holds all the default game grains: wheat, barley, oat, canola, corn, soybean and sunflower. Since grain silo systems IRL cannot store cotton or root crops like sugarbeets and potatoes, this one does NOT store those either.

Using the cool script from GtX, however, this silo (as in real life) will hold only ONE fillType at a time… to change fillTypes, you must empty the bin first. Stand in front of the output auger to get info in the F1 menu as to crop type in the bin, amount and percent of fill.

Have fun with it and enjoy, and remember NOT to upload this to other scraper sites please…

Finding a game interesting after investing 300 hours into it can become a bit challenging. But with mods as long as there is a new update is assured, you are guaranteed a few more hours of new exciting gameplay. FS 19 Placeable objects Mods are one of the greatest upgrades and can make your game unique. Downloading and adding FS19 GSI Placeable Grain Bin v1.1.0.0 Mod to your game is not difficult at all - you simply need to save a file and run it. Each Farming Simulator Mod will provide you with particular options so go ahead and add it to your version. Few clicks and you will be able to use all extra features that were only imaginary before. It is the easiest way to get the best of the game, your opponents will be surprised! Then all you need to do is simply click on FS19 GSI Placeable Grain Bin v1.1.0.0 Mod free download button and implement it to your game. This few simple steps will lift your game to the upper level – what can be better that upgrading your game personally? Break all boundaries and develop your farm easily. All of this is just the tip of the iceberg, what we offer on our website is countless hours of fun gameplay that will keep you invested for months. So go to our website, select your mod of choice, and click on download.