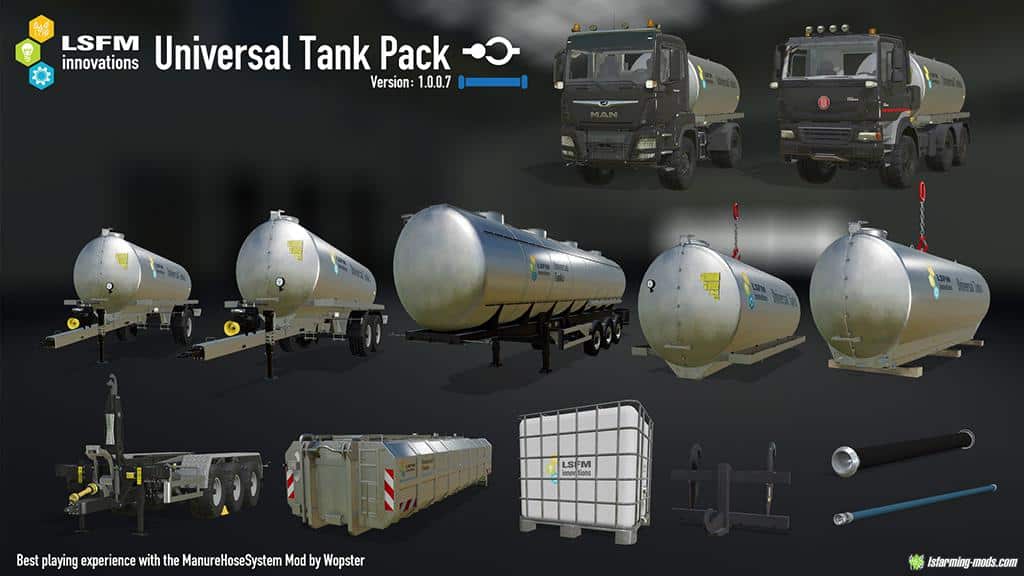 The new version of the LSFM Universal Tank Pack is now available to everyone.
As always you can find it in the downloads.

What’s new
Version 1.0.0.7
– The pump module has been removed because it is no longer required.
– ManureHoseSystem installed, Wopster Mod ManureHoseSystem is required.
– Hoses integrated in the package and various adjustments made (Credits: Thanks to Wopster for approval of the hose)
– PowerTakeOffs changed for UniversalTankTrailer7500L and UniversalTankTrailer18000L, the axles of the PTO now only appear after being attached to a tractor, eliminates unpleasant errors when connecting 2 trailers in a row.
– Added MAN TGS 18,500 and Tatra Phoenix as a shuttle tank package. These two trucks can now be purchased as a truck at the store. The Universal Shuttle Tank is already on the trucks.
– Moddesc.xml was cleaned up and the languages ​​were outsourced to their own language files.

Information about HoseSystem in the Universal Tank Pack:
All trailers and ITRunner container can handle narrow hose and manure hose.

With the small hose connection, it should be noted that the trailer shutoff valve must be opened before a fluid exchange can take place.

All liquids can be loaded from one side to the other, this also includes the LSFM IBC tank.
In addition, all trailers have the option of having two mud hoses or a universal hose on the side.
It is recommended to use the Universal Tank Pack hoses as they have been slightly adjusted.

FS 19 Packs Mods are one of the greatest upgrades and can make your game unique. Downloading and adding FS15 mods | FS17 mods | FS19 mods to your game is not difficult at all - you simply need to save a file and run it. Each Farming Simulator Mod will provide you with particular options so go ahead and add it to your version. Few clicks and you will be able to use all extra features that were only imaginary before. It is the easiest way to get the best of the game, your opponents will be surprised!